David Drenic (L) and Robert Drenic (R) look for salvageable items in a the home of a family member that was destroyed by a mudslide on Jan. 11, in Montecito, Calif.

On the fourth day of search for victims of the southern California mudslides, the death toll has increased. The Santa Barbara sheriff’s office reports that an 87-year-old victim was located in his Montecito, Calif. home, bringing the total number of casualties from to 18. At least 7 people, including a 2-year-old, remain missing.

The victims’ ages ranged from 3 to 89 and the cause of death for all was “multiple traumatic injuries due to flash flood with mudslides due to recent wildfire,” according to the sheriff’s office.

The mudslides were part of an evolving natural disaster. They followed heavy rains in Santa Barbara County, where the enormous Thomas fire burned vegetation off the hillsides. The mud swept homes off their foundations and caused a 30-square-mile debris flow. U.S. Route 101, California’s primary coastal route, remains partially shut down.

“The mud and debris flow has completely isolated places like Santa Barbara,” Jonathan Bastian of member station KCRW told NPR’s Scott Simon. “It’s posing these kind of major problems. Santa Barbara has the closest trauma center to the scene of the disaster … and a lot of nurses that work there just simply couldn’t get to work. So lot of them started to jump on boats that were ferrying around the wreckage so they could actually get there.”

Many of the deaths and injuries occurred at locations that were not under mandatory evacuation for flooding, but weeks earlier, said areas were evacuated during a series of fires. 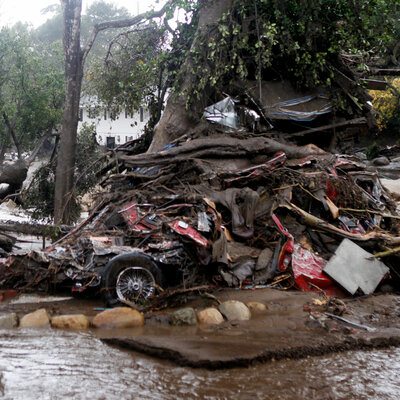 Today, residents of Montecito, California are being told to evacuate as emergency crews turn off gas and power to continue to clear mud and debris.

Irie Jam After Dark with DJ Oxtail: Setting the mood with the best in slow jams, soul & reggae.