Plans are in the pipeline for the resuscitation of the E-Government site located close to the Guyana/Brazil border crossing, in an effort to provide internet access in the capital town of Lethem and other communities in Upper Takutu-Upper Essequibo (Region Nine), government has announced.

Chairman of the National Data Management Authority (NDMA), Floyd Levi during a visit to the site on Friday, February 16, said the site, which has not functioned for some three years, was established to connect with any Brazilian company offering internet, to service government offices, Non-Governmental Organisations (NGOs) and Community Information and Communication Technology (ICT) hubs in Lethem.

“We also intend to use this position to take internet all the way to communities all the way in the North Rupununi Savannahs such as Rupertee, Annai and even far North as Kurupukari,” Levi noted.

The site visit marked the beginning of a feasibility study, which will then be followed by a further visit by a team of engineers who will conduct an assessment to determine the cost to receive internet connection from the site, possibly over a Microwave Network to the North Rupununi.

Engineers from the Ministry of Business also provided the NDMA Chairman with an initial assessment of the condition of the site. Levi explained that while not visible the tower at the site is leaning and has other infrastructural defects that must be corrected.

“The base that was built for the generator, the foundation has actually given away so we do have to make some civil engineering interventions and we need to know if those interventions are possible and what are the likely costs of resuscitating this site. That is our first priority,” Levi explained.

The NDMA Chairman was part of the team lead by Minister of Public Telecommunications, Catherine Hughes that conducted outreaches in Lethem and several villages in Region Nine including Toka, Aranaputa, Rupertee, Annai, Kurupukari and Fairview in Region Eight.

A visit was also made to the E-Government site at the Kurupukari Crossing. The NDMA Chairman said once that site is reassessed, it is anticipated that internet will be provided to the Guyana Police Force and Immigration offices in that area, Iwokrama and Fairview.

Meanwhile, the Minister of Public Telecommunications, during an outreach in the region told residents of Lethem, that the vision is to ensure that those pursuing higher education do not have to leave their town to study at an institution in Georgetown due to a lack of those facilities in the region. 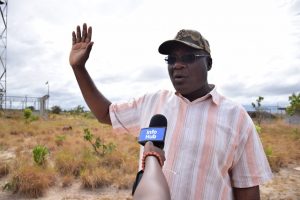 Minister Hughes explained that this will be possible through smart classrooms. “You could actually dial into that class that is taking place at the UG [University of Guyana] Campus and you will be able to have the opportunity to complete your University degree.”

The Telecommunications Minister said online studying is the way of the future and the government is committed to providing the infrastructure to make this possible for all Guyanese.

Another important sector that will benefit from efficient internet access is Health, Minister Hughes noted since there are insufficient medical institutions and doctors in the region. “We want to bring technology to the health centers…imagine if you want to speak to a doctor in Georgetown or you need to speak to a specialist …and the specialist happens to be in Barbados, we can arrange in advance for you to sit right here in Lethem and dial into that doctor who can look at that rash on your hand,” the Minister elaborated.

In the area of entrepreneurship, Minister Hughes said that access to the internet will allow the residents to advertise their products and sell them online. She said connectivity changes lives, hence the administration’s thrust is to bring the internet to as many communities as possible.

Turning her attention to the students present at the meeting, Minister Hughes urged them to utilise the internet for more than messaging and social media interaction.

Five computers were donated to the St. Ignatius Secondary School, two of which will be used exclusively by the students for completion of their assignments and research.

Mayor of the town, Carlton Beckles inquired about the Fibre Optic Cable which Minister Hughes explained was badly laid and is broken at many points.

An assessment of the cable, she said revealed that it will be too costly to repair. The Minister noted that “the technology has changed and it makes no sense to fix something that is broken in so many places…we are looking to see how we can get a new cable in.”

With the passage of the Telecommunications Act, more companies can provide internet access in the town and surrounding villages.

The Public Telecommunications Ministry is presently in talks with a Brazilian company in this regard and is optimistic that in the next six months or less, the technical persons will have a clearer idea of the strategy that will be used to provide better internet access.

The Chairman of the National Data Management Authority (NDMA), responding to concerns raised about internet speed, explained to the residents and officials of the Regional Administration that the telephone companies are utilising satellite to provide internet access, which is the most costly way of doing so.

Levi said the NDMA will consider this option in partnership with other companies.

Microwave technology, the NDMA Chair said has been around for quite some time and has proven to be much more robust in providing internet.” There are vast improvements in microwave and we are encouraging Guyana Telephone and Telegraph Company (GTT) to come with microwave first to Lethem,” he said.

GTT, Levi said is looking to partner with government, which is cognisant of the challenges with the current internet speed. The intention is to lay the Microwave network from Linden (Region Ten) to Lethem.

Additionally, Mayor Beckles said a Chinese company has expressed interest in developing a solar farm in the town.

Wake up and be IRIE

Is a Jamaican breakfast with Ackee & Saltfish with a hot cup of Milo or Horlicks.